Posted on October 27, 2015 by Andy Thorpe under Things
Leave a comment 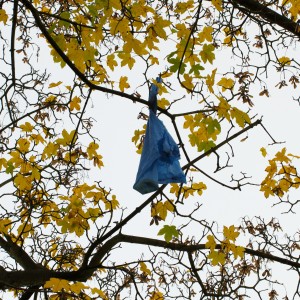 The connection is “bags”, although the one here is of the less substantial sort whereas (most of) the tourists were carrying something more robust. I’m not aware that the World Wide Fund for Nature is interested, but the plastic bag bird, also known as the bird that doesn’t fly south for the winter, is becoming less numerous. The images below show a range of habitats in which they can normally be found, although to a reducing extent.

Evidence of the existence of plastic bag birds usually becomes clearer during autumn because as trees shed leaves they can still be seen clinging to branches. As the years pass however, I can see them becoming an endangered species (currently numbering 16306) as they biodegrade and are not replaced by others. This is due to the imposition of a recent tax which has been designed to reduce their numbers.

The semi-permanence of their existence in trees can cause anxiety amongst people who live near them because they usually find them unattractive.Â  The birds are regarded as a nuisance, although eventually they leave, and of course they can be obscured by foliage in the summer months. 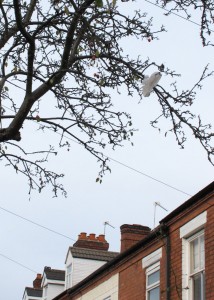 Another problem with their continuation as a species, is difficulty with mating.Â  The blue bird shown here trying to move towards the white bird is unable to disconnect itself from the branch and move closer to it. 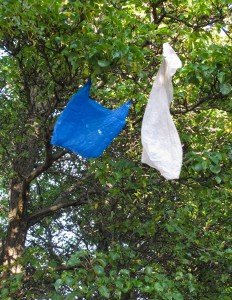 Some can be found closer to the ground in bushes, as shown in this archive photo from May 2006.Â  One very interesting aspect of the plastic bag bird is the ability to evolve its plumage over the period of a few years.Â  Observers would now see different markings on the one below, but some elements of the pattern would confirm its membership to a particular sub-species. Â  One thing that doesn’t appear to endanger the existence of plastic bag birds is their inability to blend in with their surroundings, although as noted above, they can successfully remain obscured by leaves during summer months. 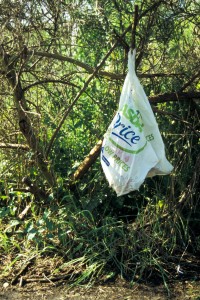 Some sub-species are very mobile and usually ground-dwelling, although they too seem to be declining in numbers. 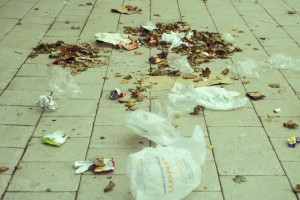 As for what is likely to take the place of plastic bag birds in trees and be visible during the winter months, there is no certainty.Â  A sturdier and more substantial species has been spotted on occasion as shown below. 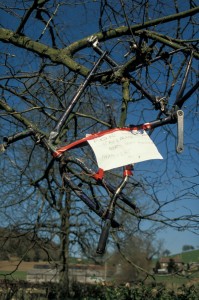 Despite the declining numbers of plastic bag birds, there is a worrying and less visible increase in the amount of plastic bag plankton in the world’s seas.Â  It is unclear as yet whether or not this can be taxed out of existence.